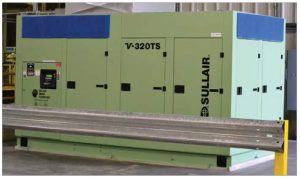 When a successful Midwestern United States-based packaging company reached out to Cleveland, Ohio-based Diversified Air Systems, Inc. (Diversified), it was simply looking to fulfill its need for backup air. Compressed air is a vital component of the packaging company’s business, used for a variety of purposes, such as in its corrugating machines, conveyors, actuators, and more. In the end, the company received much more than just air redundancy, including a new variable speed drive, two-stage air compressor, a completely reconfigured and upgraded piping system, improved system efficiencies, energy savings, and a significant energy rebate.

Data-logging the Installation
Diversified, along with its Sullair sales manager, met with the new customer to conduct an initial air study. The plant communicated they have 8,728 annual operating hours and a utility rate of $0.08 per kWh. The Demand rate was $10.00 per kw per month. The air compressors were data logged for a period of seven days during which the average ambient temperature was 49˚F and the relative humidity was 72%. Plant personnel confirmed the running hours and plant loads, recorded during this period, was a good representative sample of annual production. The data-logging tools recorded data every 15 seconds. 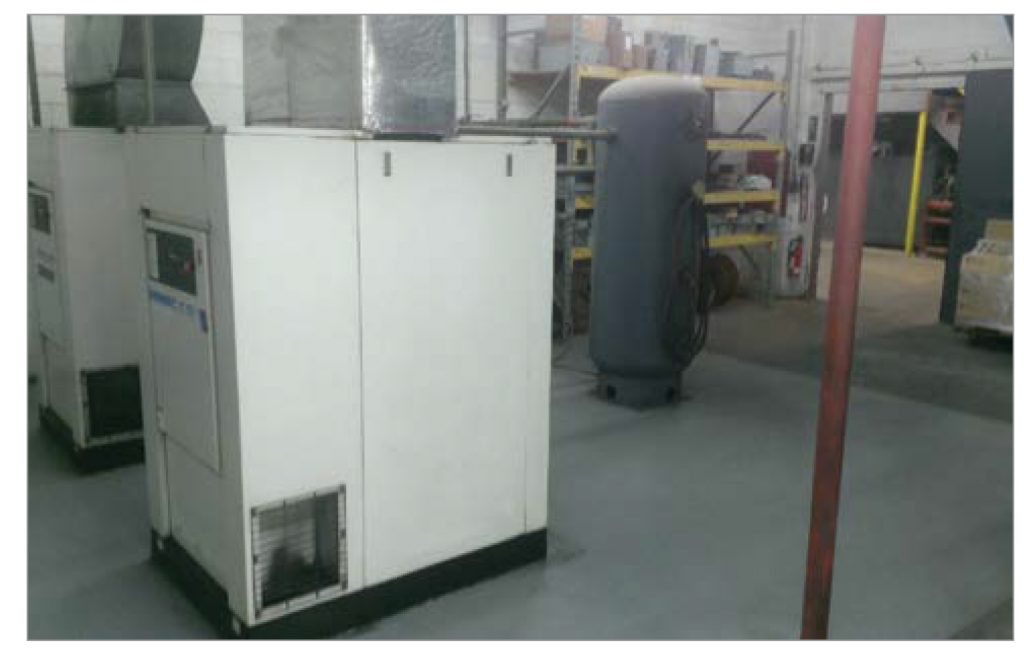 The “Before” Situation
The audit showed that each air compressor was running at partial loads, with a total average flow of 623.8 scfm during the weeklong testing period. The total of six air compressors were necessary to run the plant, and as a consequence, there was no redundancy whatsoever. Thus, if any of the compressors were to go down for maintenance the company would not be able to sustain its production. The annual energy cost of the current system totaled $149,000. Both the customer and the distributor recognized the importance of incorporating an efficient backup air system. It also became clear that running so many load/unload machines at partial loads was inefficient.

Ensuring Efficient Redundancy
After analyzing the audit information, Diversified suggested the plant install one Sullair V320-TS-250H with a new Sullair RC2000 refrigerated air dryer, pre- and after filters, and a new 1550 gallon receiver tank. Not only would the new system fulfill the need for 100 percent redundancy, but the two-stage VSD compressor would also be more durable and efficient. Sullair’s two-stage tandem compressors use two sets of rotors arranged in an end-to-end design for full-load and part-load efficiency, with a two-year payback on energy savings compared to a single-stage compressor. Capacity is matched to system need for reduced cycle time and longer life. The packaging company would use the new system as its primary air source and its previous compressors as a back up. 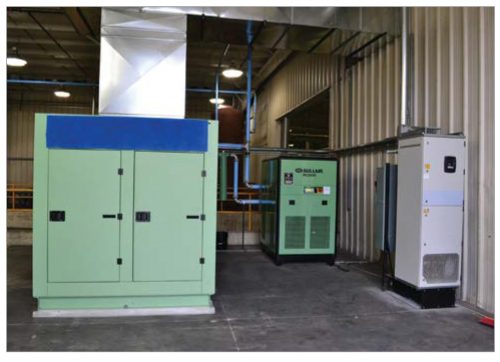 Pressure, Distribution Concerns
From the start, Diversified recognized this would not be a standard installation. First off, this was not a one-for-one replacement, but more along the lines of a complete overhaul of the air system. Thus, there was not enough space in either existing compressor rooms for the new Sullair equipment and receiver tank. Plus, with more than 50 years in business, the packaging company had expanded its facility multiple times, making distribution a concern. Additionally, due to different size piping throughout the plant, the customer was experiencing pressure loss at various points of use locations of the building. After analyzing the facility and studying the customer-provided piping schematic for the entire plant, Diversified suggested a new location for the air compressor.

Unfortunately, the new location only had two inch pipe surrounding the room, which would fall well below the recommended pipe size for a 200 HP compressor, and would also fail to maximize the efficiency of the new compressor. Diversified proposed expanding the main header at the new installation site to four inches and running that out of the tank in two directions, connecting into the existing header in two separate connection locations.

Ducting the updraft exhaust cooling air from the compressor, then recouping that heat into two portions of the plant using a diverter for both “summer” and “winter” modes was also part of the installation. Diversified also brought in an outside contractor to grout the machine, which ensures it will have complete and uniform contact with the mounting surface. While those services were outsourced, Diversified’s own technicians handled the piping installation with roughly 600 feet of Infinity brand aluminum piping. The end result was an impressive-looking system with a drastic improvement in pressure consistency throughout the plant. 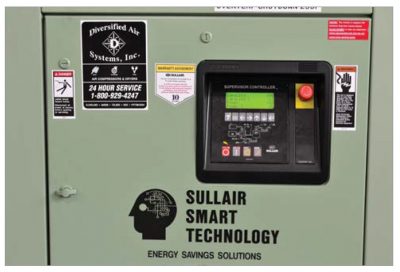 The post-project compressed air study triggered the release of an energy rebate check of more than $46,000 from
the local utility company—nearly doubling the amount anticipated.

Energy Savings Plus a Rebate Check
Not only did the packaging company receive a complete air system upgrade and back up air plan, but it also received an unanticipated bonus—significant annual energy savings and a rebate of thousands of dollars. In a post-air study conducted by Diversified, the new load profile showed the VSD machine varying between 30 – 80 percent capacity, with an average of 388.9 scfm.

The weeklong study showed a projected annual energy cost of under $75,000 with an annual kWh reduction of 550,536.13 kWh. This equated to an impressive 50 percent reduction from the previous system. In addition to annual energy savings, the post-project compressed air verification study resulted in an energy rebate of more than $46,000 from the local utility company—nearly doubling the amount anticipated. Further, by ducting the cooling exhaust air into the plant during the winter operation, they achieved an additional estimated cost savings of nearly $15,000 compared to the cost of natural gas supply the same amount of heat (761,700 BTUs / hour).